“I Am Not Your Toy!” Campaign 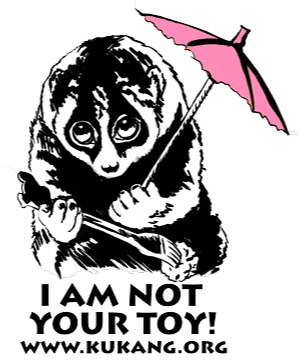 By watching or sharing “cute” videos or photographs where slow lorises are being “tickled”, wearing dresses, being fed rice balls, or handling a small umbrella, you unconsciously support the suffering of these enigmatic creatures! Their cuteness has become their curse and these videos openly support that. If you come across such a video you should realize that the animal in the video is suffering. If you are among those who would like to buy and bring these animals home, read first what journey they have to undergo before they get to that umbrella in a cage somewhere in Europe, America, Russia, China, or anywhere else.

Why Not Buy a Slow Loris

Do you really want to be a part of this spoilt and cruel trade? Do you want to have this only poisonous primate in the world at home and expose yourself to the risk of the venomous bite? Do you want to break laws on animal protection and torture these animals due to the lack of knowledge of their biology and needs?

Do you know that slow lorises in those videos raise their forelimbs as they are full of fear, they squint due to the unpleasant fluorescent light, and holding the small umbrella is just their natural grasp reflex? Do you know that entire families of wild slow lorises are often hunted and illegally sold in the streets and on animal markets? Do you know that slow lorises mark their territory and it really stinks? Do you also know that according to the IUCN Red List both the Javan and Bangka slow lorises have been already listed as “critically endangered species” and therefore there is an extremely high risk of their extinction in the wild? Also, other species of slow lorises are among “endangered species” and there is a high risk of them becoming extinct in the wild, too. The main threat to them is the illegal trade in animals.

“I Am Not Your Toy!” is a campaign responding to the modern threat to slow lorises that has appeared with the expansion of their videos on YouTube and elsewhere on the internet. In fact, it is only a human amusement of cruelty on animals. In recent years, these videos have increased the interest in slow lorises which supports illegal trade in these animals and causes their gradual disappearance from the wild.

What can I do?